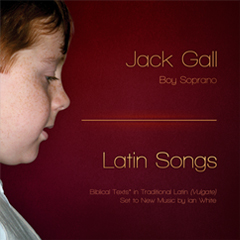 The story behind this project is that two years ago Ian started giving singing lessons to Jack, then aged 10, and found that he particularly liked singing in Latin. Ian decided to have a try at writing some new pieces for him! Using the most widely used Latin translation of the Bible, the Vulgate, Ian just picked some good texts, and composed pieces around them. The songs received a great response when Jack sang them in our local church, and the next stage was to produce an album, and here it is!